Do you fear speaking up, think that you’re responsible to fix it all and keep everyone happy?

Do you often overstep your limits and then regret it later?

Do you struggle to say “No” for fear of what the other person will say or think of you?

If you answered yes to any of these questions, you might be struggling with codependency.

Codependency is a term used to describe your relationship style when you struggle to be yourself around others and need the approval of others to feel okay about yourself. This may demonstrate itself in difficulties expressing your opinions and feelings in social settings or romantic relationships, challenges with responding to people who are emotionally intense or unhappy, and/or an overwhelming sense of aloneness or loneliness when you’re by yourself.

Other signs of codependency include:

Codependency Is a Learned Behavior!

Codependency is a learned behavior that is developed in childhood to survive in your family. The result of an enmeshed relationship with one of your parents, codependency is a way of behaving that diminishes your presence to caretake someone else. This can be developed if your parent(s) undermined or ignored your feelings or perhaps often made their feelings more important than yours. 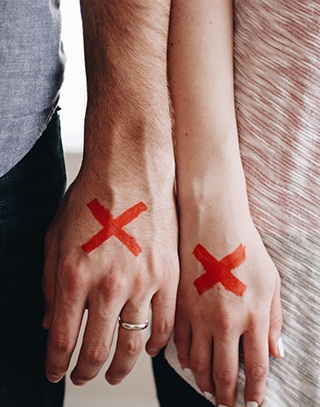 This was the case with Jeff who grew up in a family with strict rules and high expectations. Jeff was expected by his parents to do well in school, be successful in extra-curricular activities, and wasn’t allowed to complain. Jeff recalled his parents frequently fought, and things in the home were often tense.

After their fights, Jeff’s mother would often come and find him and ask him to run errands with her. While out on errands, Jeff’s mother would confide in him about her relationship with his father, express her upset toward his father, and ask him for advice. Rarely did she take interest in him or how he was feeling. Over time, Jeff learned that his mother wasn’t emotionally available to offer him help or support. His experiences taught him that she was fragile and needed him to be strong.

When he first came to session, Jeff was seeking help for improving his relationship with his partner who was frequently frustrated with him for not speaking up and being emotionally distant in their relationship.

Jeff would think about the conflict in the relationship frequently and mull it over in his mind. He shared that he often wanted to speak, but wasn’t sure he would “say the right thing” and was “worried I’ll upset her.”

Jeff wanted to be more open in his relationship, but he also felt uncomfortable “making things about me.”

When talking about their fights, Jeff would often say, “I don’t really know what to do; I just want her to be happy.”

Jeff’s concerns, lack of confidence and passivity are common traits for someone who struggles with codependency.

Thankfully, Jeff was willing to learn about what codependency is and incorporate new skills through therapy. As he began speaking more honestly, setting some of his own boundaries, and asking for his needs to be met in the relationship, Jeff became more comfortable with himself and was able to worry less about keeping everyone else happy.